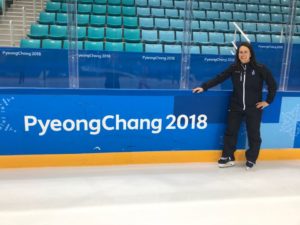 For a minute, Katie Guay was speechless.

The opening ceremony of the 2018 Olympic Winter

Games had just ended and the awe of seeing it in person was setting in.

“It’s a little surreal,” she said over the phone, her call coming in from Pyeongchang, South Korea, just after the event ended.

The fireworks that filled TV screens in Massachusetts early in the morning had covered the night sky over Guay’s head. The hundreds of athletes, dignitaries and representatives that marched into the Pyeongchang Olympic Stadium over cable broadcasts had walked right by her.

Nearly a lifetime’s worth of dedication on the ice put her in the perfect seat to witness the moment in person. And for Guay, that moment could only be described as incredible.

When the Olympic games conclude later this week, though, Guay won’t return to her hometown of Westfield with a medal to show off. You won’t see her name on the back of a jersey when the United States battles Canada for the gold.

But, if you watched a women’s ice hockey game during the Olympics, you probably saw her intently analyzing the game and skating alongside those hopeful athletes.

After roughly a decade of work, Guay is one of four American women to go to the Olympics as a women’s ice hockey official.
***

Guay called it her first taste of the real world.

She graduated from Brown University in 2005 and found a full-time job as an auditor for BJ’s Wholesale Club. For three weeks of the month, she traveled along the east coast, spending most of her days in a car or a plane.

But for the majority of her life, that kind of time was spent on the ice. After watching her older siblings Todd and Lisa play, Guay joined her first hockey team when she was about six years old.

Her passion for the sport only grew.

She played a year at Westfield High School – “I was the only girl on the team,” Guay added – before transferring to Deerfield Academy during her sophomore year. She broke the school record for goals by notching 74 in her career before she played Division I women’s hockey at Brown. The accolades only continued while she was there.

She played alongside future Olympians on the Team USA U-22 team, and she attended some of the national team camps.

“I realized that I wanted hockey to continue to be a part of my life as it always had been,” Guay said. “I just missed it so much. After that first year, I thought, ‘how can I get back into it?'”

That return started with a women’s league. As she saw different pathways and opportunities, though, Guay once again found a home on the ice. She picked up some Division III women’s games, and a year later took on Division I. Then came development camps and another trail of opportunities.

As someone who also had a passion for travel, the goal became to officiate international tournaments.

“I realized I would be able to see the world through a game that I love,” Guay said.

Guay, as it turned out, accomplished that goal somewhat quickly. In 2011, she went to France for her first international tournament. Over the past decade, she has gone to multiple countries in Europe, including Budapest and Switzerland, all because of her skill as a referee.

ay wanted to officiate at the Olympics.

Paul Stewart met Guay about eight years ago and something about her stood out almost immediately.

While investing her time in international tournaments, Guay continued to referee women’s games with the ECAC and Hockey East. (In fact, up until the past year, officiating was a part-time job for Guay as she also held a position in the Noble and Greenough School’s development office.)

But Stewart, the ECAC’s Director of Officiating, saw something in Guay that was different from other officials. She had size. She understood the game – she was aggressive as a player throughout her career. And she was one of the best skaters Stewart had ever seen.

“I don’t know how to teach it,” Stewart said. “And the thing that amazes me about her is this year, with the idea that she might have a shot at the Olympics, she came out to the rink three or four days a week at 5:45 a.m. and skated. She hired a skating coach to improve.

Stewart, for his part, takes a father-like pride in Guay. He wishes he had 20 more of her, and in 2015 he began incorporating her into Division I men’s officiating crews – not as a stunt, but because she deserved to be there.

“Officiating men’s Division I hockey was never really a goal of mine,” Guay said. “I didn’t even realize it was a possibility.”

In reality, it wasn’t previously a possibility for her. Guay was the first woman to put in consistent time as a men’s hockey official at the Division-I level.

Stewart brought up the idea at a coaches’ me

eting where Katey Stone, the head women’s coach at Harvard and a former United States Olympic coach, was in attendance.

“Katey Stone said to me, ‘I think it’s a great idea, but I hope it’s not a gimmick,'” Stewart said. “That triggered in my mind exactly why I wouldn’t make it a gimmick, because it’s condescending to the sport and offensive and disrespectful to the coaches and athletes in the sport.”

At first, Guay was hesitant. She didn’t think she was ready. Then, one day, Stewart made the decision on his own, adding a men’s game to her schedule and following the same process he would with a male rookie official. He put her on staffs that had supportive and experienced individuals, and she covered eight or 10 games in her first year.

Guay, for her part, fit in with ease.

“I think if (NHL commissioner) Gary Bettman is ever interested in breaking the glass ceiling, she’s got a combination of all the right stuff,” Stewart said of the chance a woman could officiate in the NHL one day.

“Katie Guay is athletic, intelligent, sharp, knows the game, has good presentation. And how would we not do it as a gimmick? Feed her in slowly. Get her into some American League games. Get her so she’s comfortable and slip her into a game some night.”

Guay was on the ice at the Agganis Arena in Boston in late October when Team USA faced off against Canada during a tour of exhibition games.

Young women and girls filled many of the seats in the sold-out arena, waving flags and holding signs. Some of them with their faces painted. They were about to see the best women’s hockey players in the world. And, maybe some of them noticed the female officials skating around the ice.

Guay knows that representation matters. She was a young hockey player in 1998 when she watched the United States women’s hockey team win gold. She was still playing hockey with all boys.

y eyes quite a bit,” Guay said, reflecting back on that game.

This year’s exhibition game, filled with energy, was Guay’s final chance to prove she could hack it as an Olympic official. She had worked for nearly eight years – from her first world championship tournament in 2011 – attempting to reach her Olympic dream.

It took on-ice testing drills. Off-ice fitness testing. Supervisors providing feedback after each and every tournament. Sheets of paper with observations staking up, putting together a picture of Guay’s abilities as a referee.

She knew she was on the long list – a group of 35 that needed to submit paperwork for work visas in South Korea – but all she could do after the exhibition game was wait.

Guay was informed that she would find out if she made the Olympic cut on Dec. 1. The day was the one she was waiting for, but the call didn’t come.

After hoping when she was younger to one day play in the Olympics, that dream – albeit in a slightly different form – waited in limbo.

“I just continued to wait for the moment and knew it was, at that point, out of my control,” Guay said. “I had done all I could at that point. I felt that I put my best effort forward both at the fitness testing and at my final game to showcase my officiating.

“You never really know why selections are m

ade, so I just kept my fingers crossed and hoped for the best.”

For Guay’s parents, Susan and Yves, the moment was exactly what any parent who watched their child fall in love with a sport hopes for.

“Katie has worked very hard to get where she is today,” Susan Guay said. “Surprised? No, we were very hopeful and ecstatic when she was chosen.

Within 24 hours of Katie Guay hearing the news, her parents told every family member, every friend and every colleague they could reach.

Before this past week, Susan and Yves Guay had never crossed either the Atlantic or Pacific ocean. Her parents will spend the final few days of the Olympics in South Korea with her, watching and supporting their daughter as they have done since her first hockey game.

“To find out that she could be in the Olympics for reffing, it made us feel so good,” Susan Guays said. “She’s a determined girl. She put her mind to it and she worked hard to get there.”

Guay will not officiate during the gold-medal game Wednesday – she cannot ref any games played by the United States. Her presence on the ice, though, from collegiate hockey to the Olympic level, remains vital.

She didn’t know about many of the opportunities she now is working and living through. Several of them didn’t exist. Her own mentor, Julie Piacentini, who officiated Olympic games in the early 2000s, didn’t have the same chance to officiate men’s games.

While Guay breaks proverbial glass ceilings with her work ethic and skill, her goal now rests with future officials. She wants to help them not only see potential paths, but also have the skillset to explore them on their own. She’s gone to development camps during the summer and worked with younger officials who aspire to what Guay now does.

“When I really first thought

“It’s what I hope to continue to do and leave a legacy as one that came back to the game and helped others reach their goals.”